Professional solution for all 2.5D milling and engraving works

VCarvePro is a high-capacity, flexible software package of professional quality. It includes all design, layout and machine functions for commercial use, but at the same time it is very simple and well-arranged in operation and on top of it very cost-effective!

In addition to the first-class VCarving routine it provides:

When developing VCarvePro, besides a general usability, we wanted to simplify procedures and make them more logical.

One of the most important tools of VCarvePro is the realistic 3D tool track preview. The results of all tool tracks are visualised as previews by means of a 3D model. This means for users: No matter if processing with only one track or a complex combination consisting of tools and working procedure – as soon as the simulation is converted into reality, everything fits immediately.

Besides checking tool tracks, the preview function also serves as a wonderful sales aid: By means of high-quality rendering and the possibility of displaying realistic material surfaces and their bonding with colour, you are able to create customer proofs or display possible designs without one single milling procedure.

V-Carving produces by means of maintaining the milling drill in a constant angle with flexible cutting depth 3D carving effects similar to the handicraft of a carver.
The extremely quick and robust VCarving engine of VCarvePro processes even complex drafts as simple as this. Many CAM programmes are overstrained with complicated designs – the calculation might take up to 15 minutes or it is necessary to divide it into parts.
VCarvePro attends to such calculations in seconds! Besides the high calculation speed and the reliable data handling, many users report that the generated paths run a lot more consistent and smoother than with their previously purchased and more expensive programmes! Apart from the “normal” carving, VCarvePro supports many other processing methods, i.e. generating a flat surface by means of a second tool which works out an optimal smooth view. Another option is the extension of recesses beyond the original cutting width of the used ‘knife’ by several working procedures.

3D elements of the Vector Art 3D Clip Art collection can be imported into your drafts in order to design your results even more interestingly and beneficiary. The 3D Clip Art models of vectorart3D.com are generated by freeware VA3D-Machinist to begin with. VCarvePro imports the tool paths and a grey scale preview of the files. In the 2D view the preview can be interactively positioned; the linked 3D tool paths are moved alongside the 3D view. Thus imported designs and tool paths can be turned and mirrored for symmetrical drafts. After completion of these complex drafts all paths can be displayed by VCarvePro.

VCarvePro can create text lines and blocks by means of any TrueType font that is installed on your computer. The “Auto Layout” function allows you to link a text block with a rectangle part of your draft. This function saves you a lot of time if the text size does not matter, but the text needs to fit with the draft.

It only takes seconds to change „Restaurant Paul“ into „Hotel & Restaurant Paul“, as the software automatically adopts the scaling of the font size and adjusts the designed area in the draft. After entering the text, you can change format and line spacing by means of the text cursor in real time. A simple click between the characters reduces the space, Shift+Click enlarges it. In a simple connection to a presaged arch, text lines can be arranged in an arching way.

By means of using the shape tool path function, items can be easily and efficiently milled. You choose the desired form, the adequate tool from your tool data and VCarvePro does the rest. VCarvePro automatically balances the tool radius and arranges nested forms in order to secure that inside forms, i.e. the inside of the character “O” being milled previous to the outside form.

For every form full control of the milling equipment in conjunction with the automatic or manual control of the dipping point is possible. Individual recesses can be generated by means of several procedures depending on the maximum milling depth of the used tools. Positive or negative tolerances can be configured through „undercutting“ or „overlapping“ of the form.

A very useful function is the generating of „edgy“ corners. This function is being used when milling with a V-Bit milling drill, which produces a curve when “rolling” around a sharp corner using a normal tool path. With the “square corners” function of VCarvePro you can generate angular corners. You may see an example of the use of this function at the cut characters in beside illustration.

The bar function of VCarvePro is very efficient and easy to use. You can insert little bars into the cut sections of panels, in order to fix the component. After processing the bar can easily be cut or broken off thus laying open the part. The import of the bars happens either automatically by configuring the minimum and maximum number of bars and the distance between the bars, or manually by clicking alongside the component contour. After automatic configuration you can simply remove, change or add bars with just one mouse click.

Another developed feature is the possibility of setting 3D bars. With this kind of bar generating the tool moves constantly upwards until it reaches the appointed thickness at the centre of the bar and from there it moves downwards alongside the remaining bar length.
Normally these bars are generated when the tool stops at the beginning of each bar, then runs with the chosen thickness over the full length of the bar and finally dips into the cutting depth again. The VCarvePro method provides much smoother milling tracks, due to the fact that the CNC machine does not need to abruptly change directions. Furthermore these bars can be removed from the component much easier and with less residue.

VCarvePro enables the easy and simple generating of pocket tool tracks. You destine the vectors for the geometry of your component and the software adopts the sorting by means of automatic appointment of islands as well as parallel offset for the diameter of the used milling drill. If the depth of the pocket exceeds the maximum milling depth of the used tool in an individual milling process, VCarvePro automatically starts several processes.

VCarvePro provides several simple generating routines for drilling tool control. No matter if you need to drill one hole or hundreds. You set the vectors for the holes and VCarvePro will drill through in the middle of the vector position until it reaches the appointed depth. The arrangement in groups facilitates this process by merging all vectors of a certain tool track planning. The tool data base provides appropriate types of drills in order to make the real tool geometry visibly in a 3D preview.

Above this VCarvePro provides drilling control in several steps until the appointed depth is reached, thus breaking splints and enabling greater drilling depths on critical materials.

Another feature that we integrated recently due to a customer’s requirement, is the possibility of generating raised characters with sharp inside and outside corners. For this purpose you use a V-Bit milling drill. VCarvePro automatically calculates the 3D movements. Outside corners of the characters can be generated in round or angular appearance.

Very often these characters are laid open after the 3D processing. For this purpose VCarvePro automatically calculates the offset of the milling tool. In addition it is reasonable to use the bar function as this secures the maintaining of the character on the material during the drilling process and prevents it from getting damaged.

VCarvePro provides an individual tool for efficient processing of 3D textures by means of tool geometry.

Normally the 3D surface design requires the use of an expensive additional programme. In order to gain a clean milling drill result of these textures, you would need a tool with a small ball head and lots of time.

The VCarvePro solution of this problem is unique. The texture is generated by using the full capacity of the tool form, and for the track control you add coincidence parameters, in order to generate a “hand-carved” looking surface. However, the milling procedure remains extremely efficient. This way you can also produce amazingly looking “hand-carved” backgrounds, which supersede time-consuming additional working procedures on top of it.

Import and Export of files

VCarvePro is able to import many other design programmes by using standard data formats, i.e. DXF, EPS, AI or PDF. After the import of data, the programme provides a variety of operation options, i.e. arranging in groups, mirroring or cutting of vectors. In connection to that it is important to have the possibility of identifying duplicated vectors as well as to make out and close open vectors. When repairing low-quality files, this tool may save you much work.

As with the import, VCarvePro is also able to export your files into DXF, EPS, AI and PDF formats – an important advantage when designing layout drafts!
Auto Nesting

The auto nestling function allows you in future to position a number of components under the indication of quantity and size of material to your own advantage, providing an economical use of the material.

Thus you can work efficiently and effectively with regards to material expenses. This function is also essential for plasma arc cutting. 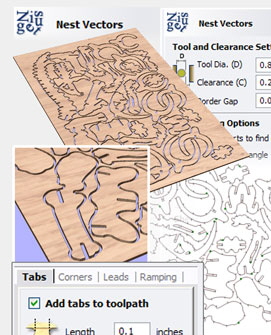 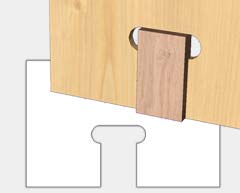 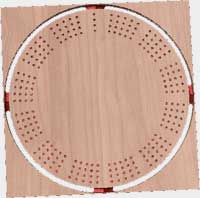 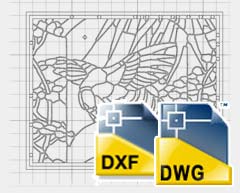 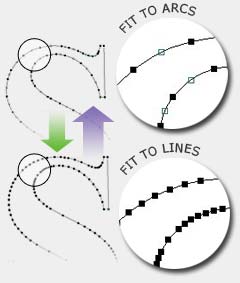 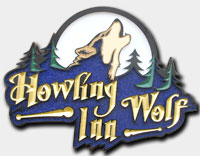 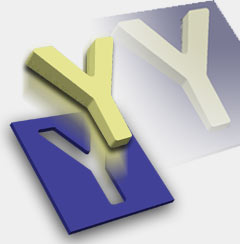 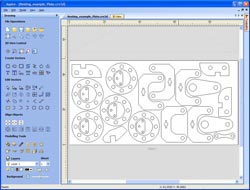 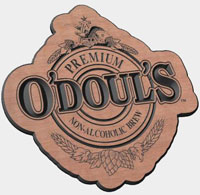 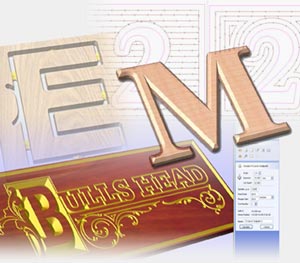 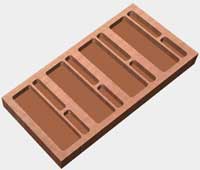 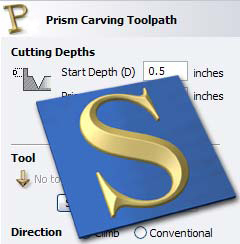 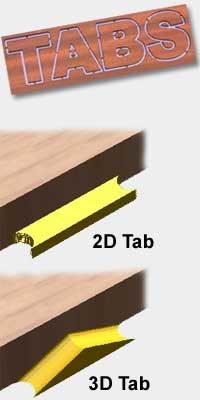 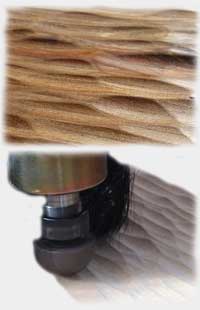 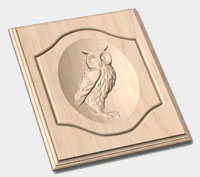 Scroll to top
Up to 20%
Discount Get it now, here
don't display x
Only for a short time: The High-Z series beginner milling machines are currently available as a bundle with a 20% discount!
don't display x