functions for the input of design in CAD

Work with the CAD Menu Layout, Process, Draw, Operate, Edit. The carrying out of the following tasks is dependent on your program expansion stage. Depending on the program configuration not all tasks can be realised as described.

For the description of the inputs and terms employed please read the General Instructions.

All operations are carried out using a reference layer, the ActLayer (current or active layer). The desired layer is selected here. All layers of the same value! The layers can be allocated names in the tool input (engraving, text,..). Layers, which are provided with data, are marked with the number of support points, empty layers marked with 0. The second marking identifies the number of text lines.

Determine extension limits for processing. These limits are employed for calculations and are always set if the function Graphic NORM is initiated.

The worklimits are adjusted to the existing data. This function can be used with existing graphic and/or text data only.

Fig. right: multiple arrangement of graphic and text with increment of a serial number in Layout . Tile.

With the individual operations the texts are not taken into account and, if necessary, must be converted into graphics. If texts are available the selection: Text > Graphic takes place: texts are considered as graphics. Ignore : texts are ignored. Abort : the function is aborted. 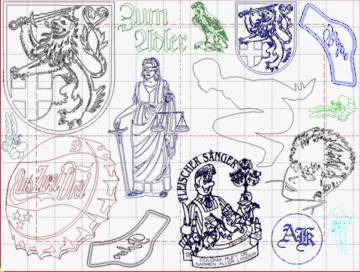 Example: simultaneous milling of several milling tasks alongside each other.

You can use several milling tasks in the layers and mill them in one setting. The milling tasks (respectively in an own layer) can be displaced and so arranged to each other that the use of material is minimised.

Data from another layer are marked and copied into the ActLayer. Following this these are available in ActLayer and in the source layer. For this, first the source layer is to be selected. After this sections and contours can be marked in the selected layer. Display:

The marked tracks and sections are copied into another layer, After this, these are available in the ActLayer and in the target layer.

Delete the graphic data of one or more layers. For deletion, several layers can be marked (with a cross) and then removed together using delete. Texts are not taken into account. To delete texts use the function Delete Text.

Delete all text lines, however, no vector graphic.