This function can be used in two ways:

All Graphics and all texts from the ActLayer are used for the calculation.

The milling path calculation requires a complete and correctly input tool (comp. Parameter . Tool Input). The tool is displayed in the right-hand side of the input window. The milling track offset results from the sumTool radius (Res) + Contour offset.

This function can be used in two modes:

All Graphics and all texts from the ActLayer are used for the calculation.

The function allows the direct calculation of 3D milling cycles (paths) from marked contours or drillings. Conversion for cutout, milling around and pocket can take place for only one contour. For route, drilling, spiral drilling, and hollow several paths can also be selected. Here own cycles are then calculated for each path. The 3D cycles are saved together with the tool data in the given target layer.

For all cycles the tool # and a target layer is needed.

The milling cycles (only contained in 3D-cycles).

Drilling.
If the drill diameter is the same as the cutter diameter then vertical movements with chip lift otherwise circular milling tracks in layers are calculated.

Thread.
Helix to mill simple threads. At the end of the helix the tool moves freely to the middle. For threads a special tool (cylindrical pin with nose) is needed.

Hollow.
Create milling path for a complete hollow (counterbore, cone and drilling). The hole milling will be executed with a cylindrical tool. Ideal are turned cylindrical tools with a small bevel at the tool dip. The Tool diameter (2xFrS) must be >= than the lower hole diameter (d).

The parameter (only contained in 3D-cycles).

Drilling at PolyPt:
Position drilling cycle along marked paths at the end of the polygon points.

First, last, one forward, one back:
The indicator in the CAM list is positioned with first .. one back as well as the cursor key <cu< b=””></cu<>Up, PgUp, CuDn, PgDn, Home, End>. The current milling object is marked in red in the graphic.

Object sequence:
Alteration of the data/milling sequence. You can displace the current milling object in the sequence to the first up to the last position.

Copy to Layer:
The current milling object is copied in another layer.

Tools:
The milling path tools can be edited in all milling objects. Please note that tool geometry modifications can lead to false milling results.

Mill graphic:
For display of the 3D milling paths from the current milling object.

Rates of cut can be calculated in 2 modes:
1) Rates of cut for graphic data in the layer in combination with layer tool.
Here no milling offset calculation is planned by the user and the milling offset is already taken into account. Paths in the graphic layer and a layer tool are required for the calculation.
The layer tool requires at least: tip radius (CuT) e.g. 1.5mm, incision depth (FEt) = max. milling depth e.g. 2.5mm and a changing station (TSt) e.g. 1. Select rates of cut control and a layer depth < tool incision depth e.g. 1mm. With layer distribution = same 3 layers with each 0.833mm are created, with  layer distribution = rest, 2 layers with 1.0mm and the last layer with 0.5mm, are created.

2) Rates of cut for milling data in the layer (recommended method).
Calculate the milling paths e.g. with  MillCorr 2D/3D. Tool . incision depth = max. milling depth e.g. 2.5mm and save these in one layer. Now, you find yourself in the selected target layer milling data with the tool information. Select the target layer with the milling data. Select rates of cut control and a layer depth < tool incision depth e.g. 1mm. With layer distribution = same 3 layers with each 0.833mm are created, with layer distribution = rest, 2 layers with 1.0mm and the last layer with 0.5mm, are created.

Example: drilling with chip pass.
Simple drillings which, for example, have been input using Draw . Point (drilling), can be provided with rates of cut control in layers  using chip passes.

Holding webs can only be input for milling data with tool information. If you are in a layer with graphic data the input is discontinued with error message.

The holding web input is ended using the  key or at the Mouse using .

This function can be used in 2 modes:

All graphics and all texts from the  ActLayer are employed for the calculation.

In AutoCorrection there summarised. A detailed description can be found under the Autocorrection Program.

Project the milling data from a layer onto free-form areas. This milling data can consist of 2D and/or 3D milling paths and must possess a correct tool (layer tool or tool(s) in the data). A detailed description can be found under The Projection. 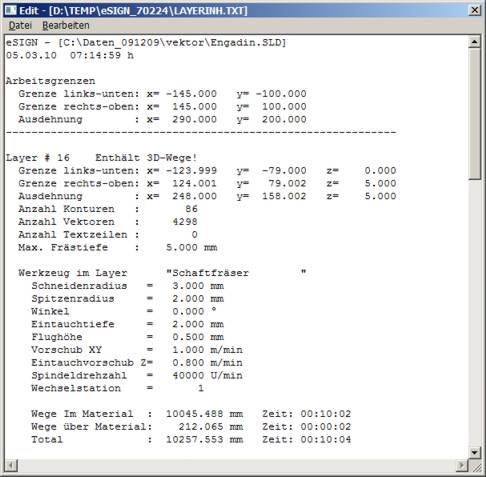 3D view of the cutter centre track. The milling data are shown in perspective. The perspective angle can be adjusted using the 8 direction buttons. With the setting in plan view (all angles = 0) the 3D paths are shown in grey (colour) shades. ´The settings for the 3D view are possible in 2 variants. The switch over takes place using the button Graph/Norm. For the zoom selection  (enlarged view/extract) the input is switched in the setting graph  (to Menu).

BMP image:
Save the image in a BMP file.

Working off of milling data using the tool data.